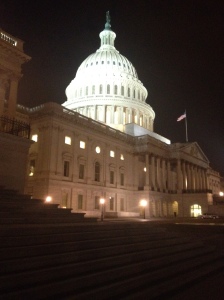 I recently reread two really good pieces on different roles the government should take in helping flailing industries. One was the last chapter of Clay Christensen et al.’s The Innovator’s Prescription, and the other was Atul Gawande’s Testing, Testing. Plus, I have my own addition. (Bear in mind, this all relates to established industries, so I won’t mention the additional subsidizing roles the government could take in helping the foundation of industries.)

Christensen et al. tell multiple stories that are all pretty similar to each other, but here’s a typical one: the government sees that mainframe computers are really expensive and that IBM has a near monopoly on them, so, using the “increase competition, lower prices” dogma, it spends tons of money trying to break up IBM. Meanwhile, new innovative companies come along and meet the same computing needs of consumers with way cheaper micro-processor-based computers, lowering prices for computing way more than competition amongst a bunch of broken up IBM competitors could ever have. Moral of the story #1: instead of worrying so much about monopolies and other limitations on sustaining competition, the government should be more focused on identifying and eliminating regulatory barriers to disruptive innovators. This is when you should think about barriers such as against the building of specialty hospitals, certain prescription-writing privileges for physician extenders, and the licensing of dental health aide therapists for serving rural areas.

Gawande talks about the agricultural industry and how it was revolutionized into a much more efficient industry through a government program (that started out as just another pilot program) that eventually placed government-employed farming consultants in nearly every county. The role of the consultants was to continually provide to the local farmers information about the state-of-the-art methods for growing the best and most abundant crops. For some reason, the invisible hand of competition wasn’t enough to convince farmers to use new farming techniques. Moral of the story #2: if competitors don’t have access to information that can help them improve value, or if the implementation of such information is above their ability/willingness to try, the government can help information flow and help competitors implement that information, possibly by providing subsidies that take away the downside risk of implementation or by teaching how others are doing it.

Is this list exhaustive? Honestly, I don’t know. I guess the question I need to be able to answer is, Are there other causes of competition failing? I can’t think of any others, but I’m not enough of a markets historian.

Also, this post obviously doesn’t explain exactly why I think financial incentives aren’t aligned with value in healthcare, but that’s what I’ve spent the last month writing a perspective article about (thus, the long time since my last post), and the ideas will make it to my blog hopefully soon.